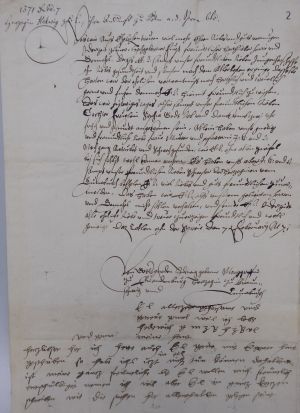 The 500th anniversary of the birth of Duke Julius of Brunswick-Lüneburg (1528‒1589, and prince of Brunswick-Wolfenbüttel from 1568), founder of the library of Wolfenbüttel, is coming up in a few years’ time, yet only a few aspects of the enthusiastic reformer’s manifold achievements have been studied to date.

What is more, the life of Duchess Hedwig (1540‒1602), who was born a Princess of Brandenburg, is known to us only in fragments, even though the source material is not bad at all: correspondence between the two, who were married in 1560, survives even from the time of their engagement and they exchanged letters until Julius’s death. The Duchess continued to write letters after being widowed. The letters offer insights into male vs. female writing habits while also providing information about the education and interests of the Protestant princely couple and the constraints imposed by social roles. The study of this correspondence thus meshes well with current discourses in literary studies and cultural history.

An additional aspect is also worthy of mention. The extensive corpus of letters contains information facilitating the reconstruction of historical correspondence networks, including a familial/dynastic network extending between the court of Wolfenbüttel and the Hohenzollern residence in Cölln on the river Spree. Books and letters also travelled between Wolfenbüttel and Wolgast, where the eldest daughter, Sophia Hedwig (1561‒1631), resided after her marriage to Ernst Ludwig of Pomerania-Wolgast (1545‒1592) and before she moved, as a widow, to Loitz and founded a church library there. There were close contacts with Duchess Sophia of Brunswick-Lüneburg in her widow’s residence at Schöningen and with the court of Augustus and Anna of Saxony in Dresden. Duchess Hedwig, the founder of the court pharmacy in Wolfenbüttel, corresponded with duchesses and countesses interested in medical practice. The contents of these letters facilitate the continuation of studies on knowledge transfer between aristocratic women and the participation of women in the world of learning. A reconstruction of the joint and individual activities of a princely couple based on information in surviving letters is an innovative approach to researching the 16th century. The results of the study will be published in a monograph that also contains the text of selected letters.