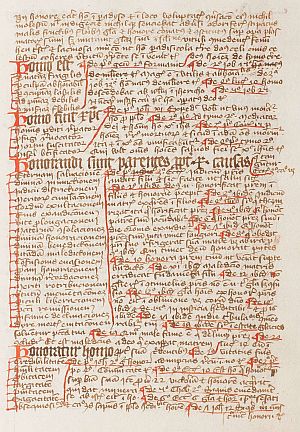 Digitising the medieval manuscripts in the Ratsbücherei Lüneburg

The medieval manuscripts in the Ratsbücherei Lüneburg (Lüneburg’s 600-year-old Town Council Library) constitute the largest municipally owned collection of its kind in northern Germany. In terms of content, the collection focuses on theological and legal texts from the High and Late Middle Ages, the vast majority of which are in Latin.

There are, however, several important manuscripts in Middle High German and in particular Low German (e.g. the richly illuminated Sachsenspiegel, Ms. Jurid. 1) as well as liturgical texts of St John Chrystostom (Theol. 2° 86, 89, 90, 94, 102).

Digitising these manuscripts makes it possible for researchers to access the contents at any time they choose and regardless of location. As the Ratsbücherei itself only permits limited access and numerous resources and research literature are not available at all, online publication makes particular sense as a strategy for promoting research on the holdings. Converting the catalogue entries so that the texts can be examined in their entirety serves this purpose.

The aim of the project was to digitise around half the medieval Lüneberg manuscripts within a clearly defined time frame in order to make them more accessible for research purposes. The digitised entries were catalogued in depth on the basis of metadata and the full texts of the entries were made accessible electronically for the first time ever. The cataloguing relied on the printed catalogues, which were produced in line with Deutsche Forschungsgemeinschaft (German Research Foundation, DFG) guidelines: the images and registry data from these catalogues were already available on the Manuscripta Mediaevalia platform. The project further sought to gather empirical data on the experience of digitising external holdings in a manuscript centre.

An overview of the HAB digitised manuscripts is available online.