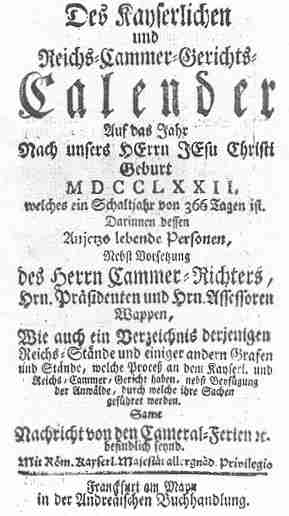 Periodic registers of personnel in the Empire and its institutions

The project aims to construct a retrospective bibliography of official registers of personnel in the Empire as a whole and in each of its institutions – e.g. the Reichstag (Imperial Diet), the Reichkreise (Imperial Circles) and the Reichsritterschaft (Imperial Knights). An evaluation of the content of these registers will serve as a basis for delineating the history of the genre.

Official calendars and handbooks became widespread throughout the Empire in the course of the 18th century. These periodicals listed the current governing and administrative personnel of an imperial institution and were usually published annually.