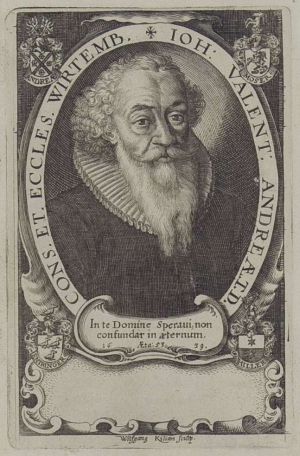 Johann Valentin Andreae (1586–1654) was an unusually colourful figure among scholars of theology in the first half of the 17th century. He was not only the author of edifying texts, a preacher and a Christian Utopian, but also an art collector, a naturalist and a member of the Fruitbearing Society.

A revival of Andreaean scholarship in recent years has revealed him to have been a man of action and a theologist with a focus on piety, who sought to found a societas christiana and fundamentally espoused – but later disavowed – Rosicrucianism. These traits place him in a pan-European movement of renewal that encompassed secular culture, religious literature and modern science. In this respect Andreae’s correspondence provides a key resource for finding out more about the circle of scholars and theologists around him. As such, it is of major relevance for studying 17th-century church history and the hermetic tradition as well as early modern German language and literature. It is also useful for research into Pietism and for gaining insights into how mentalities changed over the course of history.

The project set out to catalogue Andreae’s correspondence in depth, to digitise the documents and to create a finding aid based on the HAB’s online public access catalogue (OPAC) as well as in the form of a printed inventory. The correspondence preserved at the Herzog August Bibliothek, currently estimated to comprise 4,827 letters out of a total of 5,300, provided the main source for the project, which also entails cataloguing 350 occasional poems and ten entries in the family register. When Duke August of Brunswick-Lüneburg was seeking advice on writing a biblical harmony, he turned to the theologist Andreae, who had been appointed preacher at the Stuttgart court in 1638. The 1,295 letters they exchanged account for the largest batch of correspondence. The individual letters and their enclosures were listed in a database giving the source, the correspondent, the date and the number as well as the location of the addressee. It thus provides a practical instrument for conducting scholarly study of the correspondence. In making this resource available to international researchers, the project has substantially contributed to Early Modern Letters Online (EMLO), an international platform located at the University of Oxford and the Bodleian Library Oxford under the leadership of Howard Hotson.