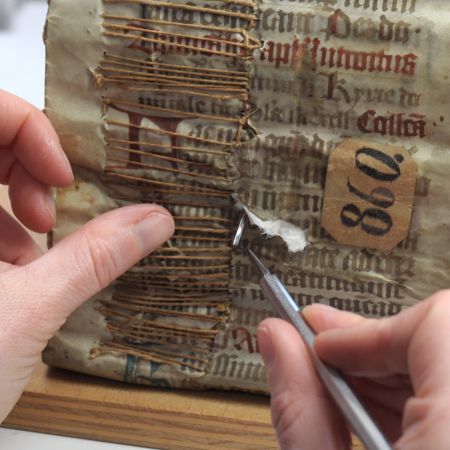 In the HAB’s restoration workshop the fragile manuscripts of the Humanist Johannes Caselius (1533–1613) have been prepared for use. Some of his handwritten texts are enclosed in limp vellum bindings and held together with long-stitching. Only a few examples of this type of binding still exist today and they require extremely careful handling both by restorers and by future users if they are to be preserved.

Johannes Caselius taught at the university of Helmstedt as a professor of philosophy, rhetoric and ethics from 1589 onwards. His extensive correspondence and a collection of other texts including commentaries and translations were selected by Tomás Valle, a guest fellow, for a research project titled Lutheran Unorthodoxy: Controversial Academic Networks, c. 1560–1621.

Even extremely careful handling still entails mechanical stress for the Caselius manuscripts, which total 50 in all. When the pages are turned, existing tears in the paper may tear further, and brittle or already damaged elements of the binding may break. Therefore, it is the job of the HAB’s conservation and restoration team to examine the state of preservation of such books, to assess the risk of damage and where necessary to prepare the volumes for use by taking the preventive and restorative measures deemed appropriate in each case.

Twenty-two volumes required special attention because they were especially badly damaged despite their simple, functional bindings. We will present them here.

All the books in this group had limp vellum bindings with long stitching. This is a flexible form of binding that was in general use from the Middle Ages until the early modern era. The pages were collated in quires – sections of several double pages folded into one another and sewn together in an envelope. The tacking thread was passed in long stitches directly through the quires and the back of the cover, allowing them to be held together without the use of glue. The material for the covers came from repurposed older manuscripts, so-called waste vellum. There were some striking examples of damage to the works, caused not only by the ‘ravages of time’ – in other words, natural aging and unfavourable storage conditions and use – but also by the comparatively weak structure of the binding combined with the materials used and the in some cases extremely voluminous books: thick books, in particular, had become misshapen and threads so worn that they tore, causing sections of the book to become loose. Some covers were made of extremely thin vellum so that it in many cases they had become bent, deformed, brittle and fragile. This, in turn, meant that the spines of such books had developed minor or more serious defects or had cracked when the book was opened or the pages turned. Frequent use and the insufficient protection offered to a weighty tome by the binding had sometimes resulted in tears and creases at the edges of the pages of uncut text blocks. Any further use would have inevitably led to more damage. Until the mid-20th century, seriously damaged bindings of this kind were rigorously replaced with a new cover, so that very few examples of long stitch have been preserved. The ensemble of Caselius manuscripts thus represents a rare exception, making its preservation all the more important.

To restore does not mean ‘to make new again’! The point is rather to restore a volume to a state in which it is able to withstand the stresses and strains of use and research, while tampering with the special binding structure as little as possible.

In the forthcoming restoration at the HAB, all the volumes are to receive a cover made of thin, transparent polyester foil (mylar) as a conservational, i.e. non-invasive measure. The decision to use this pioneering method offers several advantages: the foil protects the sensitive and exposed binding threads and the waste vellum binding. In cases where the original cover was too short, the unprotected first and last pages will be covered by the longer foil sleeve. Depending on how much movement opening and closing the book involves, the supporting mylar cover allows some flawed areas on the spine to be left untreated, thus minimising interference with the original. Because the protective cover is transparent, the binding material and technique will remain visible, as will the damage, encouraging users to handle the books with the appropriate care. Working directly on the waste vellum itself presented a major challenge. The aged materials were extremely brittle and the damage was difficult to get at because of the deformed spines. Each book required an individual approach and constant adjustments, since each restorative step, such as carefully bending the deformed text blocks back into shape, had a knock-on effect on the equally deformed, stiffened vellum covers.

Vellum is an extremely hygroscopic material, which means that it reacts immediately to changes in humidity and is thus constantly expanding and shrinking. This leads it to become brittle over time. During the restoration process, a special climate-control system was used in the workshop and the relative humidity kept at a constant 50 per cent. This corresponds with the climatic conditions of the manuscripts stack room and reading room.

In restoring the covers to their original shape, the restorers used the hygroscopic property of the vellum to their advantage. To make it slightly softer and easier to shape, a confined section of the vellum was treated with a small amount of water vapour for a short time. This was done by sandwiching the vellum between Gore-Tex membrane, which allows water vapour to penetrate, and a piece of blotting paper whose moisture levels were regulated. In this more flexible state, the vellum could be eased into shape and weighted down so that creases and buckling would be optimally smoothed out as the vellum dried. Often this procedure could be applied to an area of only a few millimetres or centimetres at a time. It required an extremely subtle approach, since even slightly too much moisture would inevitably destroy the aged vellum, leaving a gelatinous sticky mass. Patching flawed areas of the cover likewise required a different approach in each case. For this purpose washi in various thicknesses is an ideal material. With its long, pliable yet tough fibres it is flexible enough to support the book’s spine when it moves. Often the washi had to be moulded into shape in order to avoid putting any further strain on the warped vellum.

Patching up the vellum underneath the stitching threads was an especially delicate and time-consuming operation. Here the restoration had to be done in tiny steps in order both to avoid having the fragile threads tear when the washi was inserted underneath it and to integrate the small remaining fragments of the vellum cover. Threads that were already severed were carefully secured using wheat starch paste, applied in isolated spots, to stick them back together and preserve the original stitching as far as possible. Even after these minimally invasive measures, the long-stitch volumes from the group of Caselius manuscripts remain sensitive on account of their individual material qualities and therefore need to be treated with great care. For this purpose book supports with a reduced opening angle of 60° are available in the HAB reading rooms. These offer a compromise between an opening angle that protects the book and a reading position that is comfortable for users.