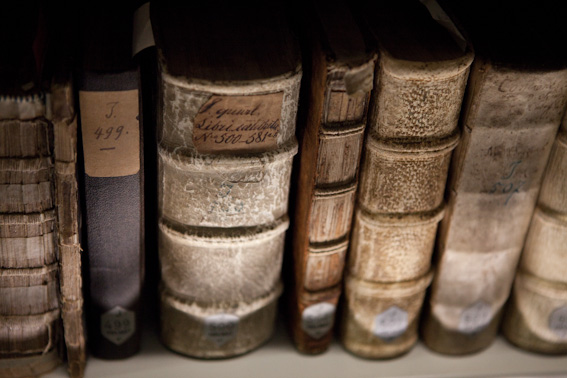 The library possesses over 400,000 printed works dating to the period 1450–1830. They are organised into three collections that have grown over time: the book collection of August d. J., Herzog von Braunschweig-Lüneburg, the holdings of the former Universitätsbibliothek (University Library) in Helmstedt and the ‘Mittlere Aufstellung’ (Middle List) consisting of acquisitions made after 1705.

The Bibliotheca Augusta, as the book collection of Herzog August der Jüngere (1579–1666) is now known, consists of around 100,000 printed works from the 15th to 17th centuries in the form of some 30,000 bound volumes. The old classification and shelf mark system developed by Augustus has been maintained. The collection comprises works aimed at a universal spectrum of fields of knowledge and genres of writings. Thanks to comprehensive antiquarian acquisitions, the collection is also illustrative of book production in the 15th and 16th centuries. The collection is divided into 20 subject groups, the most important of these being theology, history, law and the large group known as Quodlibetica.

The ‘Helmstedter’ collection comprises the holdings of the former Universitätsbibliothek in Helmstedt, which were transferred to Wolfenbüttel in 1912/13 and consist solely of works published prior to 1810. The collection includes the majority of the holdings of the university library, which was dissolved in 1810. Another part of the holdings had already been transferred to the Mittlere Aufstellung in the 19th century. An additional part is now held in the Juleum Helmstedt, and smaller parts of the collection found their way to Marburg and Göttingen in 1810. The current Helmstedt collection contains some 58,000 titles in 19,370 bound volumes. It is organised according to the old system into 18 subject groups with several subgroups. Three additional departments for miscellaneous holdings were later established in Wolfenbüttel.

The Mittlere Aufstellung, established in the 19th century as a systematic grouping of all holdings unrelated to Herzog August, comprises prints from the 15th century to 1949. The collection combines the original private princely libraries of the 17th and 18th centuries, scholarly libraries of the 18th and 19th centuries, the ongoing acquisitions made between 1705 and 1949 and the parts of the Helmstedter library categorised in the 19th century. The works in the Mittlere Aufstellung are organised according to the collection’s own subject classification system in 22 main groups, which are further subdivided into subgroups.

Since 1990, the Herzog August Bibliothek has, as part of the AG Sammlung Deutscher Drucke (Collection of German Printed Literature Working Group), assumed the functions of a national library for 17th-century works. Its task is to make the literature printed in German as well as all printed works in German from this period accessible in the library on a permanent basis. To this end, the working group is systematically expanding the existing collection by means of antiquarian purchases. To date, some 20,000 original works (books and broadsheets) representing nearly all disciplines and genres of writings typical of the era have been acquired. These acquisitions focus primarily on works that have remained relatively unknown from a bibliographical perspective, works that have not been listed in any other German libraries, works by the most important writers in German, works by poets of the Baroque era and examples of the typical genres of the era, such as emblem books and broadsheets. New acquisitions in the Sammlung Deutscher Drucke are noted in the shelf mark system with the letters Xb.

An overview, including shelf marks, of the most recent acquisitions made within the framework of the AG Sammlung Deutscher Drucke can be found in the ‘Download’ section.