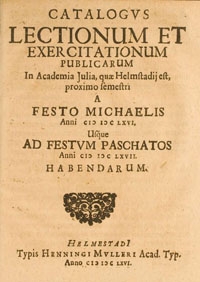 Digitising printed publications from the former university of Helmstedt

The project’s objective was to digitise images and complete texts of the works printed in Helmstedt that are now in the Herzog August Bibliothek (HAB). The HAB owns around 10,000 printed works that were published in Helmstedt before the university’s closure in 1810.

Digitising virtually all the works produced at one of northern Germany’s most important university publication sites – Helmstedt is among the ten most frequently listed places of publication in VD 17 – has not only made a significant contribution towards the complete digitisation of German cultural heritage in printed form, it also provides the first ever overview of publishing at a major university of the early modern era.

As an experiment, a large number of pages were processed by OCR and then made available as complete texts.
The project is part of the HAB’s systematic and long-term research focus on the history of the university of Helmstedt. Further projects on this subject have been: