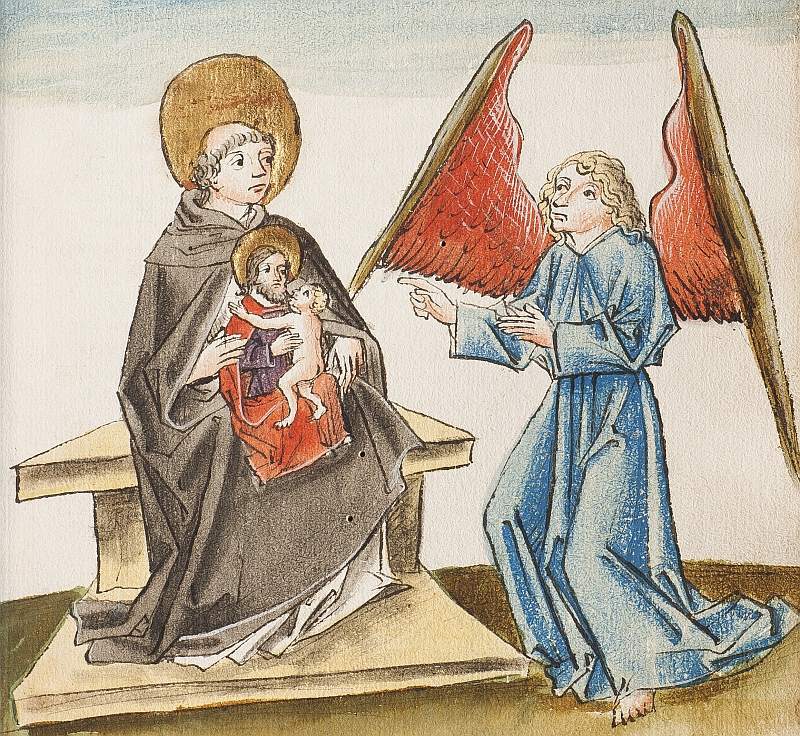 The holdings of the HAB include approximately 2,800 medieval manuscripts. Most of them date from the 15th century, a period of explosive growth in written media in which book illumination attained a new dimension. Never before had so many manuscripts been written and illuminated. How were people and the world portrayed in images at the time?

The exhibition Bilder lesen: Deutsche Buchmalerei des 15. Jahrhunderts (Reading pictures: German book illumination of the 15th century) was the first to feature a selection of particularly striking or artistic manuscripts from this period of stylistic and technical innovation. They were created in the scriptoria of northern German monasteries and the studios of southern German trading towns like Augsburg and Nuremberg and commissioned by wealthy patrons among the aristocracy, the burghers and the clergy. Brilliant miniatures and pen-and-ink sketches in delicate watercolour tones illustrate tales of adventure, specialist and devotional literature, private prayer books and texts for liturgical use. The images contain knightly heroes and cunning warriors, martyrs and mystics, and many figures and events from the Bible. Text and images are always closely related to each other. While the texts are less easy for us to understand today, the images have lost nothing of their immediacy and invite us to explore the fascinating lifeworld of society on the eve of the Reformation.

Liturgical books often contained highly ornate initial letters containing biblical scenes or portraits of the saints. Missals were usually illustrated with a full-page depiction of the Crucifixion of Christ.

Several such pages were on display side by side in the exhibition, including a fragment from the monastery of Marienrode near Hildesheim which had been acquired just before the opening of the exhibition.

Prayer books and devotional volumes accounted for a large part of late medieval book production along with mystical texts. Many examples of these books were illuminated in order to prompt readers to greater piety through the contemplation of images. One of the primary purposes of contemplating these texts and pictures was empathy with the Passion of Christ or the suffering of the Christian martyrs. Repeated meditation on the central events of salvation history served to bring the soul closer to God.

Specialist literature too was often illustrated in order to convey the material more vividly. Examples of these kinds of texts are works of natural history and military strategy. Moralistic works such as fables and books about chess also had didactic purposes. The illustrations in a collection of fables aroused the particular interest of Lessing during his tenure as librarian in Wolfenbüttel. Similarly, history books were illuminated and might also contain genealogical tables to illustrate family relationships.

The exhibition was part of a series which was devoted to book illumination in 15th-century central Europe and ran in Germany, Austria and Switzerland in 2015/2016. Other host cities were Karlsruhe, Leipzig, Nuremberg, Zittau, Graz, Klosterneuburg, Linz, Salzburg and Lucerne.