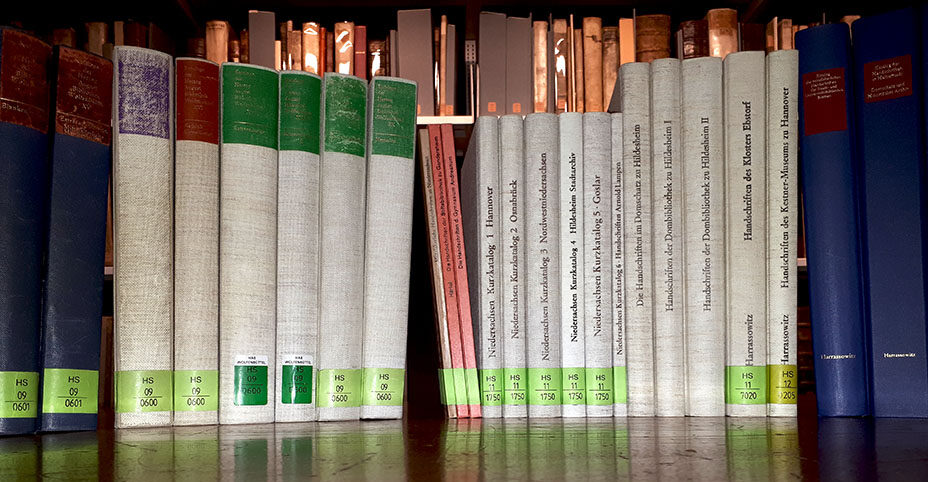 This is a very special kind of long-term undertaking: the in-depth cataloguing of medieval manuscripts at the Herzog August Bibliothek began 60 years ago. Printed catalogues, databases and digitised versions of the originals make the 1,000-year-old treasures accessible to researchers and the general public.

January 2022 marks the 60th anniversary of the first joint conference of German manuscript librarians, which was held at the Herzog August Bibliothek Wolfenbüttel. The then director, Erhart Kästner, was proud of hauling the ‘hitherto slumbering library’ back into the business of ‘lively and active cooperation’ between the major libraries. His deputy Hans Butzmann catalogued the medieval Weißenburg manuscript and the predominantly early modern Blankenburg manuscript, about which he had successfully produced two volumes of catalogue in 1964 and 1966. The meeting in 1962 resulted in the book Zur Katalogisierung mittelalterlicher und neuerer Handschriften, which would prove critical for the in-depth cataloguing of manuscript holdings in Germany and were ultimately used to create the Richtlinien Handschriftenkatalogisierung, the (still binding) guidelines issued by the Deutsche Forschungsgemeinschaft (German Research Foundation, DFG).

In the 1970s a dedicated member of staff at the HAB conducted the in-depth cataloguing of medieval manuscripts in Lower Saxony under the supervision of Helmar Härtel. All the holdings, ranging from major funds to individual items in church parishes, were listed in an ‘address book’ that documented the number of manuscripts in existence and the relevant person to contact locally. The collections in larger libraries were systematically catalogued within the framework of DFG projects at the HAB: medieval manuscripts from Lüneburg, Hanover, Osnabrück, Hildesheim and Ebstorf were presented in printed catalogues, along with smaller holdings.

As a designated manuscript centre, the HAB is working with libraries in Berlin, Frankfurt, Leipzig, Munich and Stuttgart to create a scholarly in-depth catalogue of all the manuscript holdings in Germany. Over the last 20 years medieval codices from Bremen, Halberstadt, Kiel, Lübeck and Göttingen have been catalogued, in a process that is still ongoing – this is basic research in the very best sense of the term!

Kästner and Butzmann had already established that the old Wolfenbüttel catalogues compiled by the library’s director Otto von Heinemann in the late 19th century were inadequate. Heinemann had taken something of a ‘piecework’ approach to his work, which he based on previous records. The codicological details he provided were too brief, and he was not able to identify many texts with sufficient accuracy given the means at his disposal. For this reason, the cataloguing process was started again from scratch in Wolfenbüttel using the criteria developed in 1962. From the 1970s to the 1990s, work at the HAB focused on the third-party medieval holdings and early modern manuscripts from some of the HAB collections (Extravagantes, Novissimi). In 2001, funding from the DFG made it possible to commence work on a revised edition of the HAB’s medieval Helmstedt manuscripts. An ongoing project that began in 2017 takes an art historical approach to cataloguing the illuminated manuscripts of the early and High Middle Ages, cimelia such as the Agrimensor Codex from late antiquity, the Reichenau Pericopes Book and the ornate gospel books, as well as the many hitherto neglected manuscripts with illuminations and decorated initials. A trained member of staff can catalogue around 20 to 25 manuscripts in detail based on the guidelines per year of work. The new descriptions of these manuscripts are published in printed catalogues and on an ongoing basis in the HAB’s local manuscript database, which has been providing information since 2011. This data is also entered into the national Manuscripta Mediaevalia portal. In the future, this rather outdated database will be replaced by the more recently developed Handschriftenportal (Manuscript Portal, HSP), which will provide convenient global access not only to the comprehensive descriptions but also, in many cases, to the digitised versions of the documented manuscripts.

Over the past two decades, numerous projects have exhaustively catalogued a total of over 1,000 medieval manuscripts and completely digitised over 1,600. Recent research literature on the manuscripts is being recorded in the HAB’s online public access catalogue (OPAC) and in the manuscript database, thereby ensuring that the knowledge provided is always up to date.

It’s a marathon! There are plenty more manuscripts at the HAB, particularly in the Augusteer and Novi groups, that are in need of detailed research so that they too can provide solid in-depth cataloguing data in the future, which will allow anybody who is interested to make use of them.