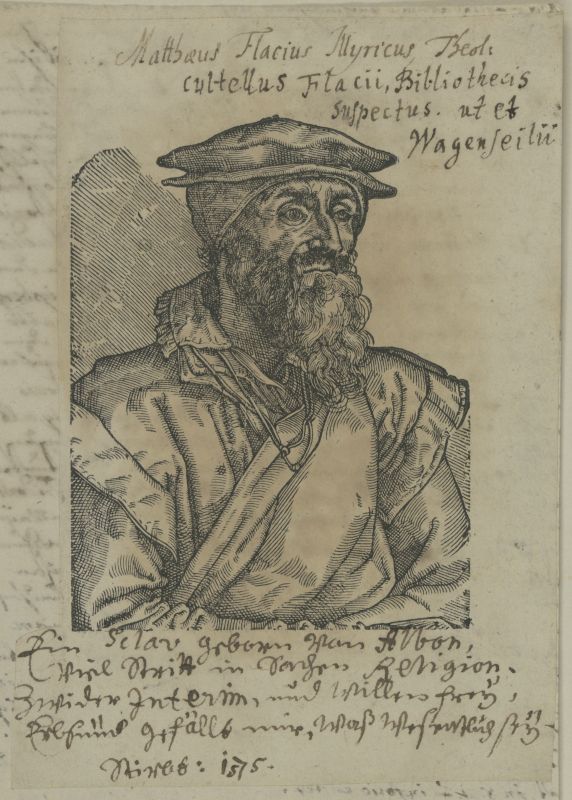 Matthias Flacius Illyricus and his manuscript collection in Wolfenbüttel and Karlsruhe

In his Wolfenbüttel ‘Liberey-Ordnung’ (library rules) of 1572, Herzog Julius von Braunschweig-Lüneburg stipulated that no-one could enter his library wearing long overgarments or carrying a knife, ‘so that the deeds allegedly committed by Illyricus in a variety of places shall not befall our library and our books.’ Two projects at the HAB have now cast new light on the alleged (mis)deeds of Matthias Flacius Illyricus.

The Protestant theologian, philologist and historian Flacius Illyricus was certainly one of the most striking figures of the Reformation. Born in 1520 in the Croatian town of Labin, Flacius studied Classics and was appointed extraordinary professor of Hebrew in Wittenberg in 1544. In the debate about the correct Protestant doctrine that broke out following Luther’s death, Flacius Illyricus often espoused much more extreme positions than his academic teacher Philipp Melanchthon and defended them rigidly and unrelentingly. For this reason he was forced to leave Wittenberg in 1549 and subsequently lost his second professorial chair at Jena in 1561. Having fallen out with the majority of the leading Protestant elites, Flacius spent the rest of his life in various cities, including Magdeburg and Frankfurt am Main, where he died in March 1575.

Whereas his many polemical writings and interpretations of the Bible are at most of exclusively historical interest, his significance as a pioneer in compiling a history of the Protestant Church is uncontested. Flacius sought to prove that the Church ruled by the Roman Popes since early Christianity had been in a process of continuous decline halted only by the Lutheran Reformation. To this end, he used his network of scholarly contacts all over Europe to search monastery libraries for texts to support his theory, which he published in his Catalogus testium veritatis (Catalogue of witnesses of the truth) and used for his major work of history Magdeburger Centurien (1559–1574). However, his dubious reputation as an intransigent theologian considerably diminished his standing as a collector of source texts.

Flacius was already suspected by contemporaries of stealing and rifling through books and was alleged to have sneaked into monastery libraries wearing a monk’s habit and removed whole manuscripts or else secretly cut out the sections of interest to him with a concealed knife. This story was also circulated by Herzog Julius and is the subject of some controversy among researchers.

To date, however, no one has taken the most obvious step towards establishing the truth of this story – namely, of examining whether any of the almost 1,000 volumes, manuscripts and prints that came to the Wolfenbüttel court library from Flacius’s estate in 1597 contain any cut-out sections or fragments. Two HAB projects funded by the Deutsche Forschungsgemeinschaft (German Research Foundation, DFG) – the project to newly catalogue the medieval Helmstedt manuscripts, which began in 2001, and the digitisation of the codices in Flacius’s possession, begun in 2020 – have now enabled researchers to find out whether this is the case.

To date, almost two-thirds of Flacius’s manuscripts have been newly catalogued in depth according to the DFG guidelines and have yielded a conclusive result: several volumes have indeed proven to be syntheses of fragments that do not match and that were compiled retrospectively by Flacius. They include Cod. Guelf. 367 Helmst., comprising a total of nine parts originating from northern and southern Germany, northern Italy, Bohemia and France. In 1554 Flacius acquired two complete manuscripts, Cod. Guelf. 277 Helmst. and 279 Helmst., from the Schottenkloster (‘Scottish’ monastery) St Aegidius in Nuremberg. Only now has it transpired that he also removed pages 132–174 from another codex and likewise took them with him (Cod. Guelf. 299.1 Helmst., fig. 1); we do not know the whereabouts of the rest of this book today. The catalogue of the Wolfenbüttel court library compiled by Liborius Otho in 1613/14 provides a good illustration of the scale of Flacius’s collecting activities. Otho’s catalogue lists more than 50 fragments of texts on Church history that are definitely attributable to Flacius. Many of these – for example, the Scottish chronicle catalogued as Z 81 (fig. 2) – can, however, no longer be found in the HAB. Research has revealed that in 1786 they found their way into another library, the Markgräflich Badische Hofbibliothek (the Court Library of the Margrave of Baden) in Karlsruhe, together with the estate of the Helmstedt scholar Hermann von der Hardt. They include the Chronicle of Holyrood (Karlsruhe, BLB, Cod. K 345) mentioned by Otho, which the historian Marcus Wagner acquired from the Scottish Cistercian Coupar Angus Abbey in 1553 on Flacius’s instructions – although we do not know whether this was with or without the permission of the previous owner.

The meticulous detective work undertaken by the researchers working on the in-depth cataloguing project has uncovered numerous pieces of evidence that clearly identify Flacius as a book thief. A further result of the project is that his inglorious activities can be traced to Wolfenbüttel and Karlsruhe. Finally, it has been revealed that even as official library users, Flacius and those who worked on his behalf did not always abide by the rules: the date on the library ticket for the manuscript Cod. Guelf 313 Helmst. from the Melk Benedictine monastery in Austria, which is preserved in Vienna, is 7 September 1552 and it has hence long since expired …

A Slav born in Albona [Labin]

Much controversy in matters of religion

Opposed to the [Augsburg] Interim and free will
Original sin likes me well, which is the very crux of it all