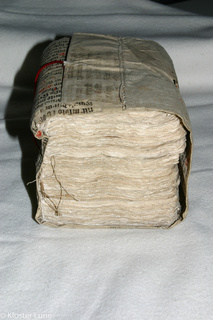 The nuns’ networks: Editing and producing an in-depth catalogue of the letters from Lüne Abbey (c.1460–1555)

The aim of this research project is to create an in-depth catalogue of the correspondence of the Benedictine nuns of Lüne – a corpus of letters that is unique in scope and character, though not well known to scholars – and to publish online and in print a critical edition of the oldest manuscript dating from the period after the great late medieval reform.

Written in Latin, Low German and a characteristic hybrid of Low German and Latin, the letters represent a substantial extension of the surviving corpus of texts written independently by women in the Middle Ages. The correspondence produced in female convents where the monastic reforms had successfully imposed strict enclosure on the nuns is particularly instructive because they were existentially dependent on written communications in almost all aspects of life as well as in the administration of their often-extensive land holdings and the exercise of parochial and other rights.

That this special case of communications by nuns has hitherto been largely neglected by researchers is partly because of the often-fragmentary nature of the sources and partly because our knowledge of the inner workings, external actions and social and cultural impact of female convents in general is incomplete. To date, the only collections from the Late Middle Ages that are known are significantly smaller and overwhelmingly originate from female monasteries in southern Germany.