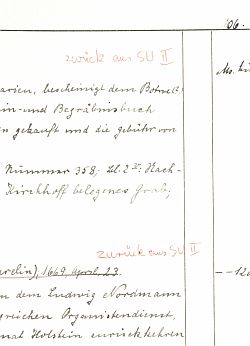 The project set out to create a digital edition of non-printed descriptions of manuscripts dating from the early 20th century. To this end it used metadata available online to produce an in-depth catalogue of all the holdings of early modern manuscripts at the Stadtbibliothek Lübeck (Lübeck City Library).

The Stadtbibliothek Lübeck, founded in 1620, currently holds 1,710 manuscripts. With 363 codices from the Middle Ages and 1,347 from the early modern era, they are among the most significant old historical holdings in northern Germany. At the end of the Second World War the holdings suffered significant losses, with extensive sections being carried off to what was then the Soviet Union, for example. Some of these manuscripts were returned to Lübeck after 1990.

The manuscripts are highly relevant for the history of Lübeck and the entire Baltic region, as well as for the history of scholarship (legal history and scientific history), for ecclesiastical history and for the history of Low German and Latin literature and education. Previously, the sole record of German theological manuscripts had been a printed catalogue dating from 1922. This valuable collection had thus remained untapped, just waiting to be catalogued and discovered by scholars. The other holdings were relatively well documented in handwritten catalogues compiled by several different authors in the early 20th century. However, these catalogues could only be accessed in person in Lübeck.

The project thus sought to make the early 20th-century handwritten catalogues accessible online. The digital in-depth cataloguing process entails comparatively little effort yet results in significant added value for researchers and interested members of the public. It can also easily be expanded and extended later if necessary. Moreover, it has now become possible to document lost items – a total of 2,271 manuscripts have been catalogued – hence providing an overview of who owned what in the past, which will be of interest to researchers and scholars. In a further stage of the project, an in-depth scholarly cataloguing of medieval manuscripts will be undertaken in accordance with guidelines set down by the Deutsche Forschungsgemeinschaft (German Research Foundation, DFG), but this will require a significantly broader time frame.

The handwritten catalogues of the manuscript holdings were completely digitised by the Stadtbibliothek Lübeck itself and have been published online on the library’s website:

The descriptions which are already online in the HAB manuscript database can be found here.