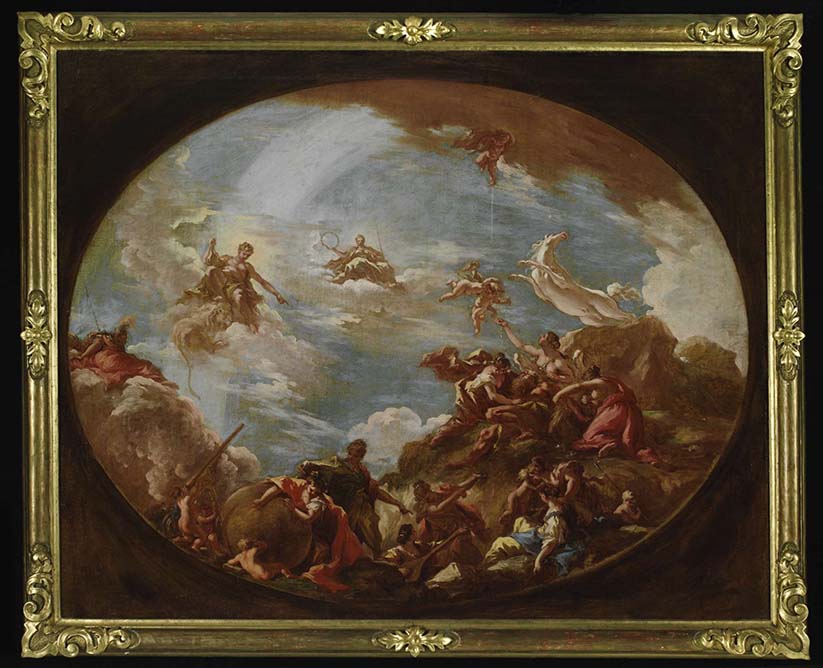 Images are to be found almost everywhere in the library’s holdings. Medieval illuminated manuscripts, sketchbooks, paintings, portraits, prints, illustrated pamphlets, postcards and modern art books include a wealth of imagery offering an opportunity for research in the area of cultural studies across different periods.

The Herzog August Bibliothek’s graphics collections contain around 90,000 prints dating to the 15th to 19th centuries, including a portrait collection with some 30,000 works, a collection of bookplates and a map collection. The collection of artists’ books offers a representative variegated view of modern prints since the early 20th century. Furthermore, the library also possesses a collection of paintings, comprised mainly of portraits of rulers and scholars.

The graphics collection comprises some 20,000 woodcuts, copperplate prints, etchings, lithographs and drawings dating to the 15th to 19th centuries with the shelf marks Graph. and Graph Res. (graphics reserve). The first large group within this rich collection of art prints had a personal attribution and these works were organised by century – and subdivided alphabetically according to the names of the engraver, woodcutter, printer, painter, draughtsperson or publisher. The second large group of anonymous illustrations is ordered according to their motifs and/or thematic content. Particularly worthy of emphasis are the following important collections: architecture and fortifications (numerous sketches and drawings), thematically organised illustrations on the art of war, military studies and individual aspects of cultural history; illustrations of battles and sieges, calendars, almanacs and other works; illustrations of stars and miraculous signs as well as works relating to the history of technology.

Listing: As part of the Virtuelles Kupferstichkabinett (Virtual Print Room) project funded by the Deutsche Forschungsgemeinschaft (German Research Foundation, DFG), in cooperation with the Herzog Anton Ulrich Museum, a large part of the collection was digitised, recatalogued and presented in a database. Additional in-depth cataloguing was carried out as part of the Kupferstichkabinett online project sponsored by the Niedersächsisches Ministerium für Wissenschaft und Kunst (Lower Saxony Ministry of Science and Culture, MWK), in cooperation with the Herzog Anton UlrichMuseum, the Art History Seminar of the Universität Göttingen and the Foto Marburg image archive.

The 4,364 sheets in the collection with the shelf mark Top. consist primarily of copperplate prints, lithographs and freehand drawings, while also including 413 photographs. The collection focuses on images of the areas surrounding Brunswick and Hanover. The subject of many of these works is the Harz Mountains. The collection also includes views of various areas made during the time of the German Empire, with special collections relating to Berlin, Brandenburg and Ludwigsburg, as well as topographical views from other European and non-European territories, including excellent engravings from Italy. These sheets are now being restored with support from the Anneliese Speith-Stiftung (Annelise Speith Foundation). Also part of the topographical collection is the Gesenius collection or ‘Topographical Apparatus’ (Top. App.). It consists of two albums with 636 views of the Duchy of Brunswick compiled by the lawyer and collector Karl Gesenius (1746–1829). This part of the collection as well as numerous other topographical works can be viewed online in the Virtuelles Kupferstichkabinett:

Ever since Duke August established his collection, the library has maintained one of the largest collections of illustrated pamphlets. Lessing appreciated these works, which he described as ‘rhyming pictures’ or ‘flying copperplate prints or woodcuts of satyric morality and satyric political content.’ But these did not arrive in the 20th century as a compact collection. Up until 1974 individual, once numerically ordered sheets, mainly dating from 1590 to 1660, were mixed in with various types of prints in the library. Today the pamphlets are organised according to five subject groups under the shelf marks IE (Ethica), IH (Historica), IP (Politica), IQ (Quodlibetica) and IT (Theologica).

Many of the pamphlets were grouped together thematically by Herzog August himself under the rubric of literature in book form. Other pamphlets are included in manuscript volumes and appear regularly in the travel reports of Philipp Hainhofer (1578–1647), who acted as an agent in the purchase of books and had encouraged the duke to collect these types of printed works in particular. One collection that has remained intact for the most part is the one compiled by Franz von Domsdorff during his studies in Rostock from 1564 to 1567, which is contained in the lot with the shelf mark 95.10 Quod. 2°. As is the case with the other collection, a number of sheets have, however, made their way into the graphics collection of the Herzog Anton Ulrich Museum in Brunswick.

The encyclopaedic orientation of the collection of pamphlets as a whole sets it apart from other, often one-sided historical collections by virtue of its development of diverse areas of focus – religious, political, ethical, natural scientific. This means that the full spectrum of content and functions relating to this medium from the early modern period combining text and images can now be studied in Wolfenbüttel.

Since 1997 the Sammlung Stopp collection has been deposited in the Herzog August Bibliothek. It comprises 60 illustrated pamphlets and three fragments from the years 1559 to 1797. The collection includes pamphlets touching on a wide range of topics. For example, several pamphlets focus on the siege and capture of Belgrade (1688) and the murder of eight women in Kuttenberg (1738).

The collection achieved its current form in 1970 with the dissolution and fusion of three of the library’s older collections: (1) a collection of Nuremberg portraits, most of which date to the 17th century (some 2,000 portraits of different individuals, including duplicates); (2) the collection of the Wolfenbüttel lawyer Carl Gesenius, acquired in 1833 and added to by the librarian Mr Schönemann, includes portraits of scholars from the 17th and 18th centuries in 56 albums; (3) a collection in 13 portfolios, organised by engraver. All of the sheets were restored and mounted on cardboard or placed in a passepartout frame. This process took place in two phases: 1969–1972 and 1980–1982. The sheets are stored in four different formats (formats I and II = octavo and quarto; formats III and IV = large and imperial folios).

The collection contains a total of some 32,000 sheets (including c.6,000 duplicates): format I, c.22,000 sheets in 305 boxes; format II, c.8,000 sheets in 127 boxes; format III, c.2,000 sheets in 110 drawers; format IV, c.100 sheets in 10 drawers. The collection also includes four boxes of silhouette portraits (189 numbered items), a box of old portrait drawings, mostly based on copperplate prints (64 numbered items), and a box of old photographs (82 numbered items). The collection contains sheets made using all printing techniques (woodcut, copperplate, etching, mezzotint and lithography) from the 16th century to the mid-19th century, with a focus on works from the 17th century. Their subjects are primarily scholars and representatives of the middle classes in the 17th and 18th centuries, mostly from German Protestant areas (and including many Lutheran theologians), as well as patricians and city councilmen from Nuremberg. It also includes a great number of portraits of rulers, particularly rulers of Brunswick-Luneburg, Brandenburg and Saxony, as well as portraits of bishops of Mainz and Würzburg.

The collection has been digitised and, together with Mortzfeld’s complete descriptions, can be accessed via the HAB’s portrait database. The digital copies and key data from Mortzfeld’s catalogue can be accessed online via the Digitaler Porträtindex (Digital Portrait Index) portal.

Approximately 150 oil paintings are held in the library’s various buildings and rooms: the majority of them once hung in the Leibniz Rotunda. Most are portraits of scholars and the rulers of Brunswick. Notable works include portraits of Martin Luther and Katharina von Bora from the school of Lucas Cranach as well as portraits of Dukes Julius and August, which hang in the vestibule of the Biblioteca Augusta, and portraits of Spinoza, Bayle, Leibniz, Lessing and Eva König.

The Herzog August Bibliothek possesses a collection of some 17,000 items from the second half of the 19th century and the early 20th century. They depict views of nearly every German city as well as a number of European and non-European cities. The collection is organised alphabetically by city and roughly according to the individual motif (historic buildings, objects of interest, etc.). The bulk of the collection was brought in by Friedrich Wilhelm Gottlieb Cruse (1836–1908), who was made director of the Wolfenbüttel prison in 1878.