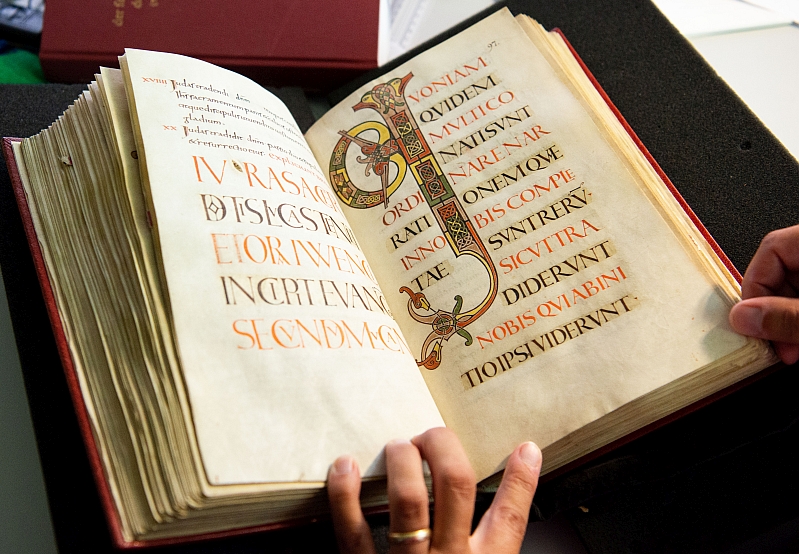 As a manuscript centre, the HAB views itself as a service provider for the indexing and cataloguing of medieval manuscripts in northern Germany. Its aim is to catalogue holdings of manuscripts which have not previously been indexed (or only inadequately so), ensure the results are accessible in catalogues and databases and facilitate access to the sources.

Since the 1970s, holdings of manuscripts from north-west Germany (the states of Lower Saxony, Bremen, Hamburg and Schleswig-Holstein) have been indexed and catalogued in accordance with guidelines issued by the Deutsche Forschungsgemeinschaft (German Research Foundation, DFG), which has also provided funding for the task. As a consequence of this endeavour, numerous printed catalogues have been produced on manuscripts from places such as Lüneburg, Ebstorf, Hildesheim, Hanover, Oldenburg, Goslar and Bremen. Most of these catalogues are also accessible via the Manuscripta mediaevalia manuscript database.

The DFG supports in-depth cataloguing of Western manuscript holdings in Germany with a dedicated funding focus that is now integrated into the cultural heritage funding programme. The work is generally carried out at one of the manuscript centres. These are libraries that already have extensive holdings of manuscripts and can thus ensure an excellent provision of literature and the requisite technical equipment. There are further manuscript centres at the Staatsbibliothek zu Berlin (Berlin State Library, SBB), the Universitätsbibliothek Johann Christian Senckenberg (Johann Christian Senckenberg University Library) in Frankfurt, the Universitätsbibliothek Leipzig (Leipzig University Library), the Bayerische Staatsbibliothek (Bavarian State Library) in Munich and the Württembergische Landesbibliothek Stuttgart (Württemberg State Library Stuttgart).

The DFG and other funding institutions also support projects devoted to cataloguing holdings in depth and setting up databases such as the Handschriftenportal (Manuscript Portal, HSP).

Institutions are encouraged to contact the HAB if they have questions about the digitisation of manuscripts.