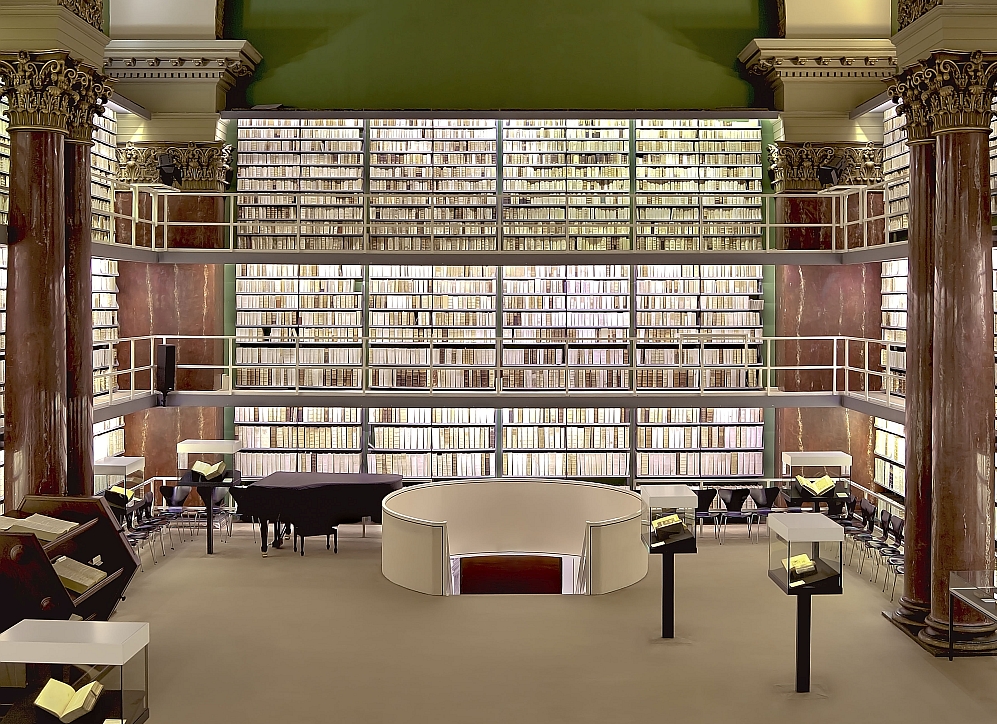 The Augusteerhalle gives visitors an initial impression of the sheer size of the ducal collection. The bookwheel and the catalogue created by Herzog August himself testify to his activities as a collector. In addition, there are temporary exhibitions focusing on specific aspects of the history of medieval and early modern culture and ideas.

A heavy bronze door leads into the Augusteerhalle, which contains the collection of Herzog August. The towering walls of books are filled with 50,000 prints and printed works in 15,000 volumes covering the two most extensively represented disciplines: Theologica and Historica. The remaining volumes, numbering just under 20,000, are spread around the other parts of the museum. Today, they are still in the same order that the duke established for his library in the early 17th century. His motivation for collecting in such a systematic and heterogeneous manner was probably a truly universal, indeed almost utopian desire to leave to posterity the entire knowledge of his age in the form of books. In addition to contemporary works, these included printed works from the 15th and 16th centuries as well as medieval knowledge handed down in manuscripts.

From the Augusteerhalle we move on to the Schatzkammer, or Treasury, which was constructed after the successful purchase of the Gospels of Henry the Lion and Matilda of England in the 1980s. A three-storey vault was built in an atrium of the Bibliotheca Augusta to hold this and other valuable manuscripts, along with particularly costly printed works. As these treasures are fragile and many centuries old, they are kept in optimal conditions to protect them from harm.

The Globensaal (Globe Hall) takes its name from the five globes exhibited there which depict the earth and the heavens. Geographical works, maps and globes were already a focus of the collection in Herzog August’s day. The shelves in the Globensaal are filled with works from the fields of law, medicine, arithmetic, geometry and physics.

The collection of painter’s books

The colourful boxes lying on the shelves among the historical holdings are a surprising element. They contain painter’s books (livres de peintre), which are also known as artist’s books. It is intended that all the artists will design their own protective covers. This genre, which originated in the early 20th century, provides a means for artists to engage with literary texts. These books are so attractive precisely because the content is related both to the illustrations (using a range of techniques) and to the material form – and all three aspects are equally important. The works are typically produced as small print runs or as one-off designs. Fine press books, collections of loose sheets, collages, boxes, accordion-fold books and scrolls are all represented.

In 1991, the book illustrator and calligrapher Hermann Zapf (1918–2015) gave parts of his extensive collection to the Herzog August Bibliothek. They included fonts, book designs and printer’s marks by Zapf for publishers in Germany and abroad, bibliophile editions, handwritten letters and documents concerning the legal protection of printed matter, as well as collections of materials about calligraphy, lead typesetting, phototypesetting, and computer techniques. In the second half of the 20th century his fonts – including Palatino, Aldus and the Optima family – influenced typography throughout the Western world.