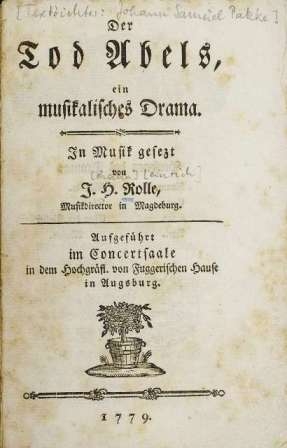 A retrospective German national bibliography of the 18th century

VD 18 contains all the printed material published between 1701 and 1800 in German or in the German-speaking areas. The works were identified by means of a collaborative process and then documented as a digital copy.

By the end of the project the HAB had processed around 3,800 works, which were catalogued, digitised, endowed with structural metadata to aid navigation and then placed online. The digital copies were entered in the online public access catalogue (OPAC), the Gemeinsamer Bibliotheksverbund (Common Library Network, GBV), the VD 18 database and the Zentrales Verzeichnis.

The purpose of the ‘Digitisation and in-depth cataloguing of printed material published in the 18th century in the German-speaking areas (VD 18)’ project was to create a retrospective German national bibliography of the 18th century, following on from the digital bibliographies VD 16 and VD 17. The collaborative project set out to record all printed works that were published either in the German language or in a German-speaking area between 1701 and 1800. Each entry was then given an individual VD 18 number. Unlike the previous VD 17 project, pertinent monographs and multi-volume works were not catalogued in a separate database but were instead integrated into the shared environment of the participating libraries; journals and magazines were listed in the journal database. A further key difference is that the works were digitised parallel to the in-depth cataloguing process.

After the HAB had indexed, catalogued and digitised around 3,800 works in the first and second phases of the project, it set about retrospectively creating an in-depth catalogue of works relevant to VD 18 that had been digitised by the Bayerische Staatsbibliothek (Bavarian State Library, BSB) in Munich as part of the cooperation with Google. The HAB was assigned a set of 2,400 works held by both the BSB and HAB.

The digitised works were entered into the OPAC, GBV and ZVDD listings. Moreover, the URLs of the digitised copies as well as the metadata can be accessed via the OAI interface of the Wolfenbütteler Digitale Bibliothek (Wolfenbüttel Digital Library, WDB), which means they can easily be integrated into the Deutsche Digitale Bibliothek (German Digital Library, DDB) or the Europeana.

You can find further information on the project in the database and also explore the digitised items themselves.