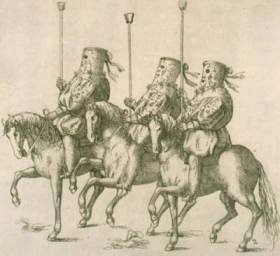 As part of the project the Herzog August Bibliothek digitised 314 printed works and produced an in-depth, page-by-page catalogue of their content. The project was carried out in cooperation with the University of Warwick / British Library digitisation project, which follows the Wolfenbüttel model. Data pertaining to 235 printed works from this project were also inputted, meaning that a total of 567 printed works have now been made available to researchers.

In addition to preparing and cataloguing the material in-depth, a procedure was developed aimed at indexing and making available scattered holdings relating to early modern festival culture according to common guidelines and based on the common festival thesaurus.

Most of the 314 printed works from Wolfenbüttel were produced in German-speaking areas between the mid-16th and the early 18th centuries. The works examined in the Warwick / British Library project focused on French, Italian and English festival accounts dating from the period between 1475 and 1700. The primary criterion for a title’s integration into the databank was that the work in question (festival account, libretto, drama, etc.) could be assigned to a specific event (birthday, ceremonial entry into a city, etc.). Furthermore, individual works were selected that could be related in a broader sense to early modern festivals or which can contribute to our understanding of early modern festival culture.