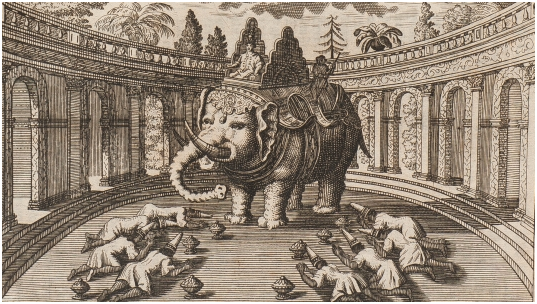 The globalised world of ‘states’ in the early 18th century

The first series examines over 40 European dominions, the second is comprised of 15 small volumes focusing on kingdoms and countries outside of Europe and the third describes the imperial cities of the Holy Roman Empire. A parody and a plagiarised version of these volumes of political geography were also published. Over 70 titles were produced, all of them anonymously.

The material is examined from a variety of perspectives. First, it sheds light on the descriptive patterns and criteria for evaluating political power in the early 18th century, for the volumes focus on elements of princely rule based on interaction as well as the institutionalised state organised into administrative bodies. Second, it reveals the similarities and differences in the perception and evaluation of European and non-European systems of rule, which presupposes a global network. The imputed absolute power of non-European monarchies had an unsettling effect. Third, from the perspectives of the history of knowledge and of media, it is interesting to note that up-to-date information pertaining to states and politics was commodified and introduced under a publisher’s control into the market-based media system. Even though this information was compiled by young university students, who had to work under precarious conditions, the publications were not classed as academic scholarly literature. Scholars have also been unable to determine any interference on the part of the authorities. Apparently, these works were aimed at meeting the demands of a wider audience.

An examination of the Regnerische Staaten thus offers insight into a specific phase of a transitional and expanding discourse surrounding political rule. The topics addressed range from princely rule and princely society to statehood and the international system, the application of European norms to non-European systems of government and the opening of political concepts and analysis to an audience wider than that of the ruling elites.