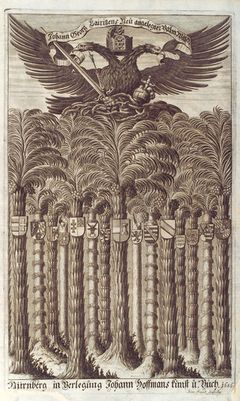 In the early modern period, European political, social and cultural systems were largely determined by individual royal houses and the complex relationships between the dynasties.

In its depictions of these structures, the genealogy of the day became a key field of scholarship for the ruling and functional elites. It produced an immense volume of images and texts about ancestry and familial relationships in the upper echelons of European nobility. The project investigated one section of the literature which has hitherto been largely neglected by scholars: the genre of universal handbooks, which provided a printed record of the genealogical data of most royal houses, or at least the most important ones. These handbooks first emerged in the late 16th century and became more widespread in the 17th century. The scope of the project was restricted to the Holy Roman Empire, resulting in a corpus of up to 70 compendia, many of which consisted of multiple volumes.

This selection was not merely pragmatic, for methodical considerations also played a role. The particular genealogies of individual dynasties were characterised by a paucity of information, with the resulting gaps filled with fictitious, mythical ancestors. Universal genealogies, however, had precisely the opposite problem: there was an overabundance of information. This meant that questions about the selection, systemisation, representation and communication of genealogical knowledge were particularly pertinent. One factor complicated the matter, namely that the material in this typographical data storage could not be organised solely on the basis of user friendliness because political implications, such as the rank ascribed to individual royal houses, were an inherent feature of the structure. This meant that the systems of knowledge and rulership were inextricably interwoven.

The research project (which ran from 2007 to August 2013) concentrated on characteristics pertaining to form, paratext and content as well as to the functional history of relevant writings in print. The project started from the hypothesis that the development of the genre over the course of the 17th century closely tracked history in general. Essentially, it indicated a shift from prestigious tome to handy work of reference, from memorialisation of aristocratic lineages to source of up-to-date information and from genealogy to integrated political geography. 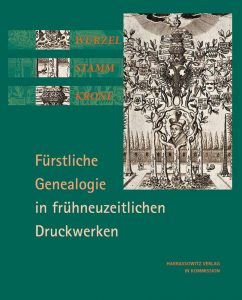