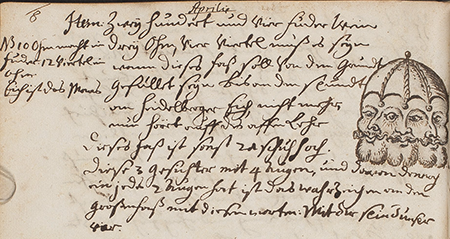 During the early modern period, the Grand Tour and journeys like it were an important educational tool for members of the noble and bourgeoise elites enabling them to acquire knowledge and develop as individuals. The Herzog August Bibliothek holds a large collection of accounts of such journeys.

In the interest, among other things, of promoting the study of such ego-documents, the project aims to produce an in-depth catalogue of these documents and publish them digitally using new technologies.

Early modern educational journeys such as the ‘Grand Tour’ were rites of passage, representing an important stage in the personal development of members of the noble and bourgeois elites, and a great number of travel accounts and diaries attest to this fact. What makes these documents particularly important for researchers of ego-documents, however, is the previously unexamined manner in which these documents do not tend to record and evaluate experiences of difference as a form of otherness but instead focus on successfully coping with foreign experiences and surroundings.

At the centre of this in-depth cataloguing project are 24 travel diaries, most of them in German, totalling some 10,300 pages written between 1500 and 1770 by young men belonging to the aristocracy and bourgeoisie. These works are now held by the Herzog August Bibliothek (HAB) and, to a lesser degree, by the Niedersächsisches Landesarchiv (Lower Saxony State Archives), Wolfenbüttel section. All of these Grand Tour diaries are to be digitised and catalogued in depth using metadata. Five texts, one of which exists in three copies, are being transcribed with the help of automated tools, using the handwriting recognition software Transkribus and coded in TEI-XML. The documents are also catalogued using Named Entity Recognition techniques and visualised by linking the text with the travel itinerary described. The project supports the experimental development of a new editorial work process and is being aided in this by Prof. Thomas Mandl at the Institute for Information Science at Universität Hildesheim. The workflow and its development is being documented in a blog and, together with the texts and research data, made available for long-term public use on the ego-document research portal (selbstzeugnisse.hab.de) and on the HAB’s GitLab-Server.