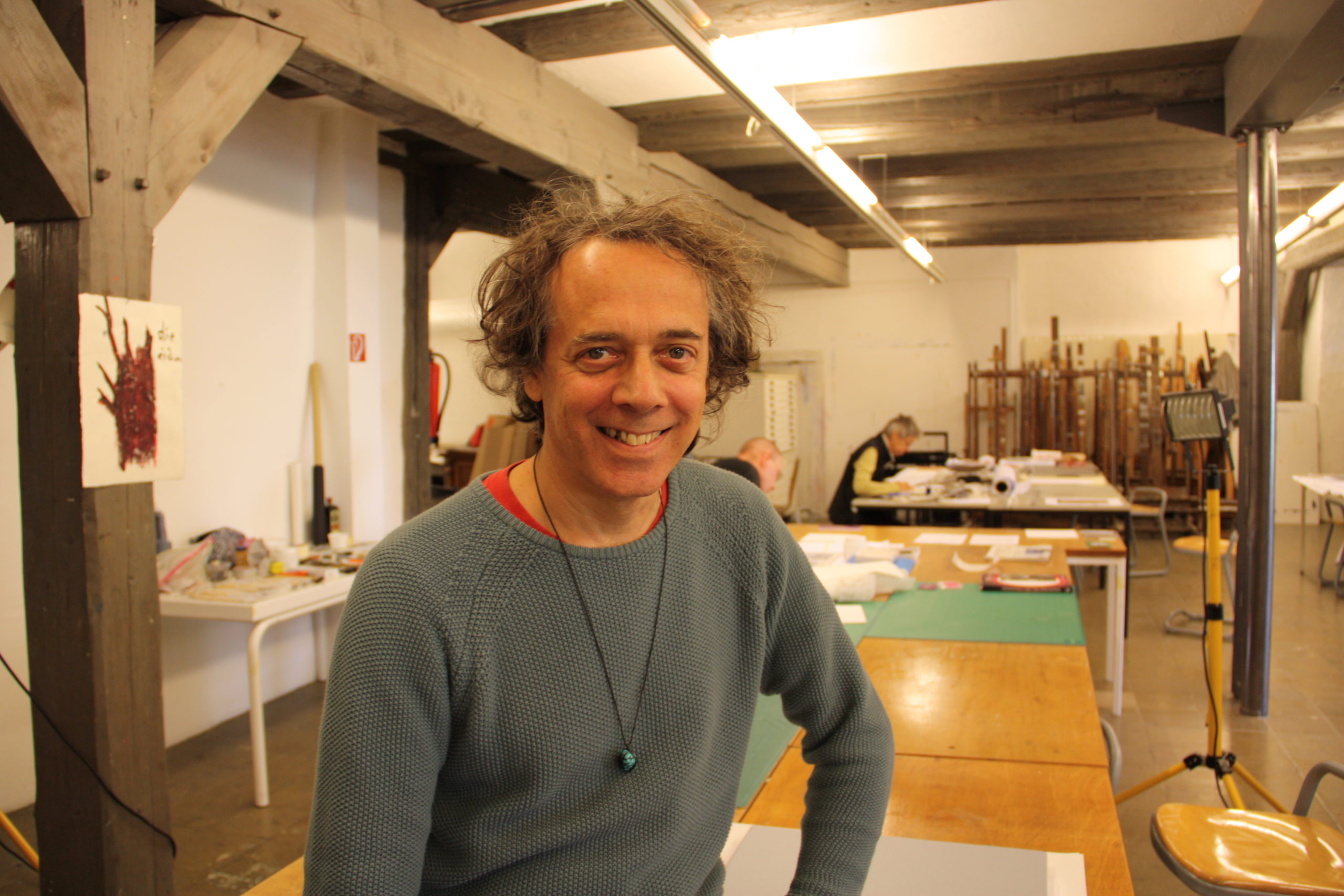 HAB: Did the workshop work out as you planned it?

Marshall Weber: Yes! There were a lot of unknowns because it is a public project and it is participatory, but we had set a limit of about 18 people and I think we ended up with 17. So it’s really been a perfect amount of people for an intensive workshop like this; I’ve been able to do a lot of one on one instruction and a lot of small group instruction. The youngest participant is 16, our oldest participant is 79. There’s arts professionals, there’s library professionals, there’s retired people, there’s people who have absolutely no involvement in the arts or the library sciences.

HAB: What was particularly surprising for you in the work with the people?

Marshall Weber: I was impressed by the commitments the people had with their projects and in general everyone seemed very prepared. We made it mandatory for people to visit the library and to do one assignment involving letter writing, to get them thinking about doing stuff by hand and about history. All that happened even before the actual presentations and workshop started, so that went really well.

HAB: Do you think the goal of the workshop “to create a lasting bond between the people of Wolfenbüttel and the HAB” has been accomplished?

Projects like these are ultimately designed as programs. They are meant to be done on a biannual or annual basis, so that they form a network, a larger connection to people, to the institution, the neighborhood and the city. So it’s hard to say what the long term results are. But I think just from the engagement of the people here you can assume that what you might call the micro-level has really been successful.

You know, the first thing I mentioned at the first general meeting with the participants and the HAB-staff in the Malerbuchsaal was that we’re all ambassadors for the library. And we do that as a way to offer the resources of the library to the people of Wolfenbüttel. I mean – it is a state library! It was made a public library I believe hundreds of years ago. So there is nothing secret or private or proprietary about the material in the library. It’s one of the biggest research libraries in the world, but you don’t have to be a professional researcher to have access to it. So it’s kind of amazing for a town like Wolfenbüttel which grew up with the library – literally.

I think it’s very important especially for younger people, as we live in this digital world, to see the material resources that we have. I know that it’s a lot of fun being on the phone and being on the computer in the virtual reality. It’s very compelling, it’s very addictive. But it’s a really nice antidote and it’s a very different experience to look at a 17th century manuscript about witchcraft, or an 18th century manuscript about astrology. I mean there is all kinds of creepy, crazy things that I believe teenagers would love. That can be very compelling as well. And there is a lot of art that is very accessible. One thing I would say especially to younger people is that in this digital world where everything from the potential for you to have a career or even just employment really depends on your visual abilities - in terms of how important creative practice and visual imaging is to the internet and to this world that we live in. The library is filled with amazing ideas that you literally will not be able to find online. So there is resources there that go much deeper and that are much more expansive that you could really imagine. I mean the library is itself the model for the internet and the library here is very unique – it’s kind of a diamond mine in the middle of the country side. It’s worth visiting and it’s filled with amazing resources.

HAB: What is your personal relationship to the HAB?

Marshall Weber: The HAB is very well-known amongst artists who work in the book form. Because it’s a library that’s known for both its 17th century collection which is intact, the preservation of its collection, which is exceptional for libraries globally and certainly in Germany where there have been major conflicts. People might wonder why that is important to a contemporary artist. Why it’s important is because there are amazing resources that help you trace the trajectory of creative process in books, from way back to incunabula from the 1200s, all the way up to the contemporary 21th century. The HAB also started to collect artist books rather vigorously in the 20th century. It’s got a reputation for collecting large ambitious books and it’s got the amazing enclosures, handmade for each of the artists by Herrn Adolf Flach.

It has had a really amazingly progressive exhibition history and it’s really interesting because they may not get large audiences for their exhibitions but they never hold back. They have made really important exhibitions of artist books: retrospectives of Ken Campbell, surveys of artist’s books in the 20th century, retrospectives of Odine Lang, etc. They’ve made exhibitions as a way to organize the history that’s contained in the library and to make new history - not just for selling tickets. And that’s an amazing commitment that you don’t see in a lot of other institutions. For a state library, that is a public institution, to be so committed to the book as a creative object, as a creative vehicle for information, is kind of rare.

Having heard of all that, when I finally got to the library with some of my books to try and sell them, I just wasn’t prepared. First of all, the design of the library is kind of amazing. There’s open shelves with artist books, with a lot of them – as I said before – in these enclosures that are handmade for each of the artist. So visually it is just incredibly impressive. And then when you’re going through the catalogue you’re just like – oh my god! – George Grosz, Leonora Carrington, Ken Campbell, Veronika Schäpers, Salvador Dalí, Aubrey Beardsley...It’s just an amazing selection of work.

The first time I visited the library, I met with Dr. Arnold and Dr. Schmidt-Glintzer. I was still somewhat (laughs) young and I remember walking into this…This library is not really austere – it’s really kind of elegant and impressive and I met these two elder men – both totally in suits and kind of perfectly dressed and to me it just seemed like: “Oh my god – these people are just not gonna understand my work. They want a nice bible or something.” And yet they acquired probably one of the craziest books that me and two friends of mine have ever made, called “Buy Land or Buy Sea”. It was just an unbelievable, positive and inspiring experience. So I just kept on coming back.

HAB: Do you have a personal favorite in the collection? Can you name one?

HAB: You can name two.

Marshall Weber: I mean the HAB has a complete collection of Ken Campbell who is one of my favorite artists who work in the book form. So it’s hard not to mention that. There is also amazing antiquity stuff. Some of the anatomy books are early pop-up books that have multi-layered anatomical forms, but there’s also – I don’t know the name of it – a really classic astronomical book that has like thousands of moving parts, that I’ve seen on display here (Thurneysser zum Thurn,Leonhard: Astrolabium. Des Menschen Circkel und Lauff. Berlin: um 1575. Anm. d. Red.). So yeah – it’s kind of hard. I have to say one of my favorite books is the book I made with Veronika Schäpers, which is called “At the Theodore Adorno Memorial” which is both a rubbing book and a documentation of a performance that was a collaboration with individuals at the Theodor Adorno Platz in Frankfurt in real time. I was at the memorial doing rubbings and people kept on walking up to me and so I started to involve them in the making of the book and incorporated their stories and some of their writing. So that is probably my favorite book – even though it’s by me.

HAB: During your time here you have created more artist’s books, which you are also going to exhibit on September 15. What are the stories behind them?

Marshall Weber: I will – amongst others – definitely exhibit the book “My Wife”, which I did in collaboration with my sister Raimie, using her vintage silver gelatin prints from her own photographs – a book that we’ve been working on for about two years, which I finished here. It’s kind of a modular sculptural book that is based on the structure that most of the participants are using in the workshop: the leporello. And another is a leporello that is about local history in Wolfenbüttel, called “Broken Star”. It involves one of the rubbings from a memorial of the Jews that were deported from Wolfenbüttel.

HAB: Do you have a piece of advice for readers of this interview, who did not get a chance to participate in this workshop but desperately want to design their own artist book? How do you start?

Marshall Weber: I would start by visiting the library. I mean you could literally go to the HAB, get a reader’s card and then you could ask the librarian to bring you six leporellos. I don’t think there is anyone that could go look at the material in the library and not be inspired. It’s just a matter of making the time to visit and ask to see the material. So that – to me – would be where to start.