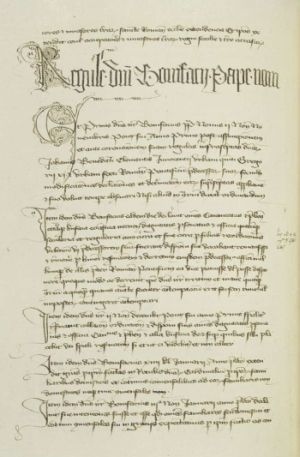 Digitisation of the medieval Helmstedt manuscripts

The manuscripts of Matthias Flacius and those of lesser provenance

The manuscripts from the former university of Helmstedt (1576–1810), which absorbed both the Bibliotheca Julia and the book and manuscript collection of Duke Julius of Brunswick Lüneburg (1528–1589) as well as other libraries, represent one of the Herzog August Bibliothek’s core collections of manuscripts and are the oldest of those held at Wolfenbüttel.

The Codices Helmstadienses collection in its entirety is the current focus of the in-depth cataloguing project ‘Cataloguing the Medieval Helmstedt Manuscripts’, which is funded by the Deutsche Forschungsgemeinschaft (German Research Foundation, DFG). The results will be gradually published online as well as in a series of printed catalogues.

The aim of the project is to digitise a significant part of the holdings not yet available in digital form, namely, the manuscripts once owned by the Protestant theologian and church historian Matthias Flacius Illyricus (1520–1575), the classical manuscripts collected by Duke Julius himself and a number of manuscripts from the collection of the Brunswick town clerk scribe and scholar Gerwin von Hameln (c.1415–1496). They will thus be made available to researchers together with revised descriptions. Reflecting the most up-to-date standards of in-depth manuscript cataloguing and digitisation, the presentation of the texts – in conjunction with the rich source material furnished by the holdings of the Herzog August Bibliothek in Wolfenbüttel – is designed to enable more intensive historical research into topics such as the provenance contexts of the Codices Helmstadienses. The digital copies created in the course of the project will be freely retrievable for this purpose via the manuscript database of the Herzog August Bibliothek and may be reused under the terms of a Creative Commons licence.