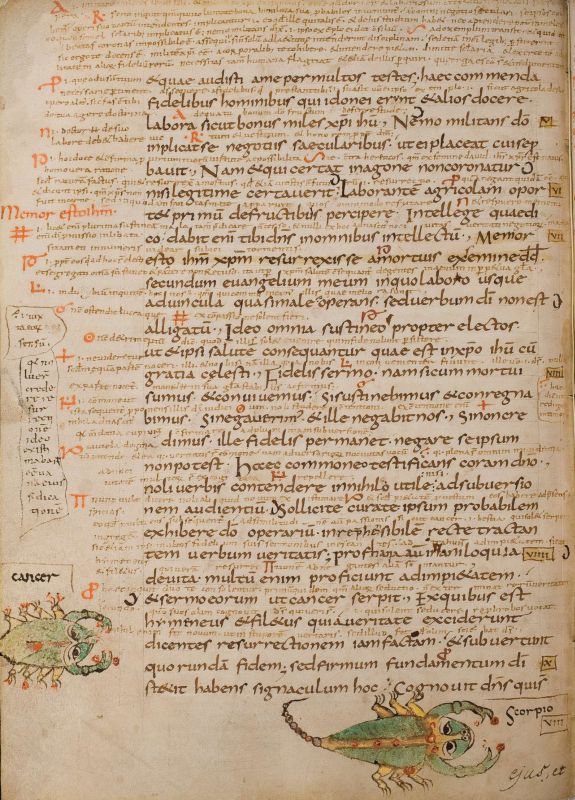 The exhibition focused on the meaning and function of marginalia in manuscripts, printed books and graphics across a millennium of European cultural history.

The exhibition in the Augusteerhalle was opened by Helwig Schmidt-Glintzer, the then director of the Herzog August Bibliothek. The official address titled ‘Margin and interstice: The meaning of the marginal in cultural history’ was given by Claudine Moulin (Universität Trier / Institut d’études avancées de Paris). The initiators and curators of the exhibition, Patrizia Carmassi of the manuscript department and Christian Heitzmann, head of the manuscript department at the HAB, subsequently gave an introduction, which was followed by a tour of the exhibition.

The exhibition focused on the meaning and function of marginalia in manuscripts, printed books and graphics dating from a thousand-year period of history. Marginal notes range from fleeting, unconventional, personal impressions of texts and images to unique evidence of teaching and learning processes. Additionally, they may contain references to technical and intellectual developments as well as historical facts and perceptions of their relevance at different periods. Moreover, some books are designed in such a way that the dividing line between the margins and the body text is deliberately blurred and left fluid. As the margins are filled, they acquire a significance that almost equals the images or texts of the main body of the book and occasionally even attain an independent relevance.

Marginal notes may contain cross references between different genres, disciplines, and events, between art and reality, between level and meta-level. They thus become an outstanding instrument for socio-historical research that supplements the usual systematic source analyses and enables new questions to be asked. Although we can observe similar updating and annotation practices through the centuries, this does not mean that the phenomenon of marginal notes is a static one. The notes reflect changes in the perception of the book as a study tool and a status symbol as well as artistic developments and fashions in the design of capitals and whole pages.

Marginal notes often serve as teaching and learning aids or as commentary and explanation of the main text, for example in the fields of theology, philosophy, law and science. Notes in the margins or between the lines begin to appear in the early Middle Ages. Occasionally, such notes are also translations of titles and technical terms. Textual interventions in the form of marginal notes can occur decades or centuries after the creation of the book. They are thus evidence of a lively engagement with received tradition. At the same time, readers and owners might also use the margins as space for their personal thoughts, impressions and life or reading experiences or for documenting additional and updated information about historical events. Marginal notes can therefore act not only as extensions and clarifications of the main text but also as corrections or contradictions if they declare its content to be erroneous or outdated.

Pictures in the margins may reflect similar phenomena and needs. They depict episodes, concepts or objects mentioned in the text in order to provide explanations and improve understanding. However, the image medium offers the possibility of including additional elements which text alone would be unable to convey, thereby providing nuances of interpretation and offering new content, as in the case of the illuminated codex of the Sachsenspiegel legal code. Visual elements like tables and diagrams are also suitable for illustrating scientific, astronomical or geographical contexts in works by Aristotle and Isidore of Seville, for example.

The exhibition featured manuscripts and prints from the thousand years between 1800 and 1800. The densely written pages of medieval books transported visitors back in time to monastic scriptoria and royal collections. Marginal notes in printed editions of scholarly, pious and entertaining works from the Reformation to the Enlightenment provided insights into the intense engagement of readers with their books.