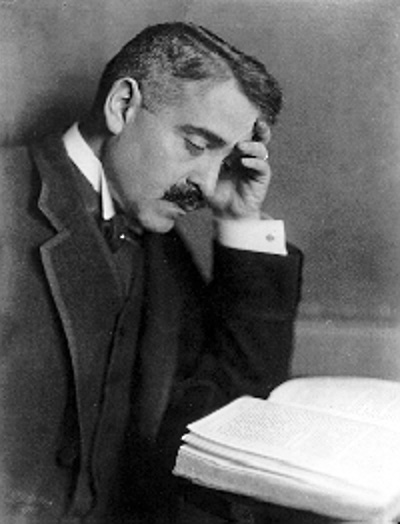 Aby Warburg and the library dragon

The HAB archive contains 26 letters and postcards written by Aby Warburg (1866–1929), the great pioneer of an interdisciplinary visual science. Together with writings from the Warburg Institute Archive, they testify to Warburg’s view of books as ‘image vehicles’ that convey visual formulas across time and space in European culture.

The letters also provide a foretaste of the potential incompatibilities between modern research and a traditional royal library.

On the morning of 16 December 1901, two men stand shivering in the unheated manuscript room of the Ducal Library in Wolfenbüttel. The older of the two, Otto von Heinemann (1824–1904), has held the office of senior librarian for 32 years. With a practised hand he lays valuable manuscripts on the long table, leafs through a few pages and then explains the origin, content and special features of each manuscript. The young man beside him, who is attentively following his every move, has entered his name in the users’ book: ‘A. Warburg, Dr phil. Florence, private scholar’. Heinemann does not suspect what an effort his guest is making to look interested and maintain his composure.

Later that evening in his room at the Deutsches Haus hotel in Braunschweig, Aby Warburg writes a letter to his wife Mary Hertz (1866–1934) describing his impressions and sentiments in detail. Heinemann is ‘proud of his treasure and is also at pains to impress a bibliophile stranger,’ he writes. But, he continues, the librarian was ‘absolutely livid at being disturbed in his normal routine and at the cold’ he had to endure as he showed Warburg ‘one manuscript after another for two minutes’. Muttering some disgruntled comments, Heinemann seemed to Warburg ‘like an aging sorcerer’, who ‘allows his young disciple to take a whiff of his box of herbs, prepared at any moment to let the lid fall shut on his nose’.

However, Warburg had not come to Braunschweig as a gawking tourist. Having met Heinemann in Lucerne the previous year, he had already sent him a postcard in March asking him for information about sources held by the library on two Florentine families, the Sassetti and the Tornabuoni. Apparently Heinemann’s answer had sounded promising. Yet now Warburg feared that he would not be shown anything at all that might be of use for his research: ‘I must make sure he comes up with something more tomorrow, otherwise I’m wasting my time here.’

Warburg certainly had reason to be worried, since Heinemann had a reputation for not being very obliging when it came to users’ wishes. While on the tram between Braunschweig and Wolfenbüttel, Warburg had already been admonished by ‘two natives’ who were familiar with ‘Heinemann as an unpleasant library dragon and proffered the young man some sage advice about how to bewitch HIM’. Like Siegfried or Jason, Warburg saw himself compelled to vanquish the ‘serpent’ Heinemann in order to get at the coveted treasure. Nevertheless, after Heinemann had displayed the library’s gems to him, Warburg did get to take a look, after all, at the magnificent manuscript of the Opera of Bartholomaeus Fontius, one of the so-called Wolfenbüttel Corviniana. However, Warburg didn’t actually learn any more from the manuscript than he already knew from the printed version – and ‘the portrait of Fontio didn’t reveal much’ either. He must have been all the more delighted then, when, the very next day, he was shown an anthology of 91 rare Florentine prints, most of them 16th-century ecclesiastical dramas. Warburg probably became aware of this anthology via a publication by Heinemann’s secretary Gustav Milchsack (1850–1919), which supplies a list of the plays contained in it.  After his return to Hamburg, Warburg was to focus particularly on the Historia di Giasone et Medea with its five woodcuts, printed in 1557.

In order to be able to study the text and its illustrations in more detail, he later asked Heinemann at least once – naturally in vain – to send him the book via interlibrary loan. In September 1904, only three months after Heinemann’s death, he sent a letter to his designated successor Milchsack asking him for photographs of the woodcuts, adding that he would ‘prefer to have the anthology here in order to be able to study it again or to have it photographed here; but I don’t dare to repeat this request, since I only recently received a negative response from the late senior librarian, even though I “of course only” wanted to use the anthology in the reading rooms of the local [Hamburg municipal] library.’ Milchsack wrote back immediately and included an obituary of Heinemann with his letter. Warburg no doubt found the not always flattering characterisation of the deceased that he was now able to read gratifying: ‘Anyone who knocked on the doors of the library all too impetuously, entertaining the notion that the books and library officials had been eagerly waiting to be of assistance to the scholar in his naturally highly significant research instead found himself to his surprise confronted with a senior librarian with a cool official air and a tightly buttoned up jacket; it was therefore all too human and understandable when the scholar subsequently gave vent to his anger with chiding remarks at not having his wishes and ambitions fulfilled. (15f.)’

Although Milchsack proved to be considerably more liberal than Heinemann, he too was subject to certain constraints. He therefore had to tell Warburg that while an interlibrary loan of the desired book was possible in principle, in this case it would require the approval of the Ducal Ministry of State and a request to this effect would need to be submitted. Warburg replied that he would be satisfied with just the photos and would not be submitting such a request for the time being. The photos arrived in Hamburg on 22 October. But to examine them without the accompanying texts was not in keeping with Warburg’s scholarly ethos. In February 1906 Warburg therefore requested a copy of Giasone et Medea, which was sent to him two months later for a fee of 30 Reichsmarks.

In the following 25 years Warburg was repeatedly to have reproductions made of images from manuscripts and prints from the Wolfenbüttel library. Many of these photographs, or at least records of them, still exist today. In his research Warburg always used the latest technology available for reproducing works of art – irrespective of whether he needed the images for his own publications. It cannot be entirely ruled out that the steadily growing picture archive at the Kulturwissenschaftliche Bibliothek Hamburg (Hamburg Library of Cultural Studies) that was amassed from the flood of photo requests to museums, libraries and archives was also motivated by the experiences Warburg had had with difficult directors of collections. Apart from Heinemann, one might also mention Guido Biagi, the director of the Biblioteca Laurenziana in Florence. His increasingly intensive use of photography as an ‘image vehicle’ of the second order certainly allowed Warburg to cut down on library visits. He never came back to Wolfenbüttel.

I would like to thank Björn Biester, Christian Heitzmann and Eckart Marchand for invaluable information and assistance. The selected edition of Warburg’s letters procured by Michael Diers will probably be published in 2021 as Volume 5 of the student edition.