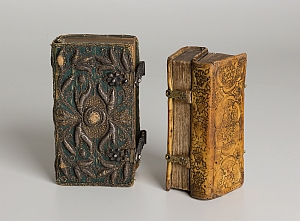 Forays through the history of books

The exhibition Ausdrucksvoll (Full of expression) at the Herzog August Bibliothek illustrated the changes in the medium of the book after Gutenberg.

In the second half of the 15th century, the invention of book printing with movable type led to a fundamental change in ‘media culture’: compared to handwritten texts, printed ones could be produced with significantly less effort and in much greater numbers. Additionally, the external appearance of books underwent a change. The sheer variety of developments in book printing was showcased by the exhibition Ausdrucksvoll: Streifzüge durch die Buchgeschichte (Full of expression: Forays through the history of books), which featured objects from the 15th to the 17th centuries.

Early prints illustrated the shift from the manuscript tradition to the printed book. Movable type began in Mainz with Johannes Gutenberg and spread throughout Europe within the space of just a few decades. Alongside examples from the German printing centres, the exhibition featured books from Italy, Spain, France and the Netherlands that bore witness to the innovative text design of the 16th and 17th centuries.

The material design of book covers provides a sensory experience even before turning to the first page. Thus, the exhibition began its exploration of the book from the outside, focusing on detailed, precious book covers from the Renaissance and Baroque periods. Once the book is opened, the reader’s attention focuses on the material of the printed pages. At the same time, typography and typesetting come to the fore. Examples document the gradual development of title pages and other auxiliary texts such as tables of contents and indexes.

As we read, we perceive not only the contents of the text but also its visual appearance: the design and arrangement of the various textual elements on the pages affect the ways in which the book conveys meaning. Prints from three centuries demonstrate that it is not only the technical production conditions that were significant. Issues of legibility and aesthetics likewise influenced the reproduction of written texts.

Typography, the layout of the pages and ornamentation and illustrations initially emulated those of the handwritten, illuminated books from the Middle Ages. Advances in printing techniques, however, soon resulted in the development of independent aesthetic and pragmatic design principles.

The exhibition ran from 21 February to 13 October 2019 in the Augusteerhalle, the Schatzkammer, the Kabinett and the Malerbuchraum of the Bibliotheca Augusta.