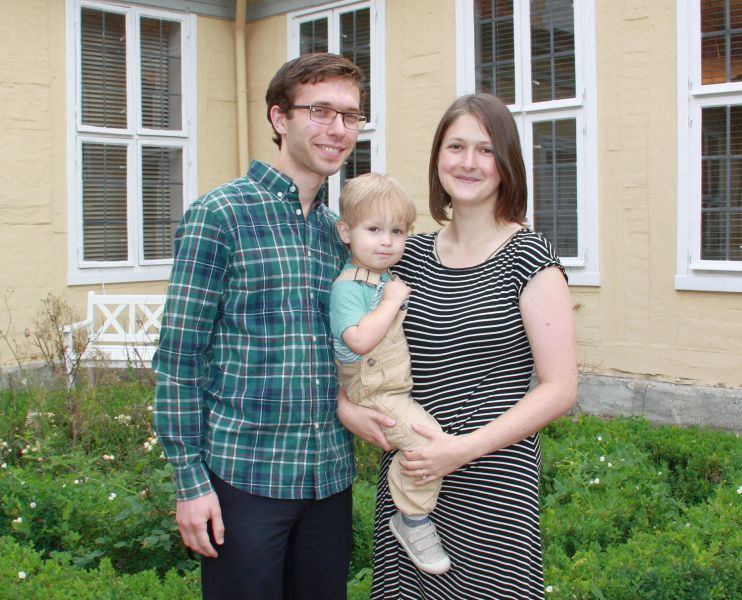 A day in the life of an HAB fellow during Covid

The Covid-19 restrictions proved challenging for the 108 research fellows working at the HAB during the pandemic. Tomás Valle (University of Notre Dame, Indiana, USA), who is studying the intellectual history of the early modern era, was one of them. We talked to Tomás about his own and his family’s experiences in Wolfenbüttel.

The interview was conducted in May 2021 and therefore reflects the situation at that time. We would like to point out that not all the restrictions described here are still in place. You can find our current opening times here.

HAB: What was the original plan for your project and your stay in Wolfenbüttel? What worked well and what did you have to change?

Tomás: My original plan was first of all to obtain an overview of the handwritten letters of Johannes Caselius (1533–1613). Caselius was perhaps the most prominent Lutheran Humanist during the last third of the 16th century and an extremely influential professor of philosophy, first at Rostock Universität and later at the university of Helmstedt. The HAB holds 28 volumes of his handwritten correspondence, a huge amount of source material in other words, much of which has yet to be used by scholars. I wanted to spend the first month or so getting a feel for it before deciding where I would like to dig deeper. But when I arrived, the manuscripts reading room was closed, and it still is. Thankfully, the staff in the Manuscripts Department (especially Dr Christian Heitzmann) were incredibly helpful and invested a lot of time and effort finding out which manuscripts could safely be sent to the Zeughaus reading room so that I could view them. They even did restoration work on the most fragile manuscripts so that these could ultimately be sent over as well.

HAB: Have you made good progress on your project? Are you happy with the results so far?

Tomás: I think I’ve made a lot of progress. Since my access to the manuscripts was limited – and because in some respects this was actually an even less transparent source than I had thought – I abandoned my original plan of examining Caselius’s handwritten correspondence, even if only temporarily. Instead, I’m working my way through his libri annotati (annotated books; see next question) and I’m continuing to get to grips with his publications in order to be able to approach his manuscripts with a better and more precise set of questions. I have also read his printed correspondence (16th- and 17th-century editions) to get a feel for his style of writing and to find out who was part of his network. All of this with the aim of understanding his handwritten letters better once I eventually get to focus on them again, which hopefully will be soon.

HAB: Did these unusual conditions also have advantages?

Tomás: Yes, actually! I already knew that Caselius’s private library had been given to the Helmstedt Universitätsbibliothek (university of Helmstedt library) in the early 17th century, so I imagined that some of his books might be in the HAB, perhaps with marginalia. But I had been so preoccupied with his manuscripts that I had not paid much attention to his printed books. When I arrived here and thought it might be months before I got to see a manuscript, I asked the director of the Manuscripts Department, Dr Christian Heitzmann, whether the HAB possessed Caselius’s libri annotati. He not only told me that it did but was also kind enough to show me how to do provenance searches in the HAB’s online catalogue. This enabled me to find more than 90 books that used to be in Caselius’s library. The list is continually growing, since I’m also finding more and more books that have not yet been catalogued as having belonged to him. This is really exciting detective work. Many of these books have extensive marginalia and are excellent sources for understanding how this Lutheran Humanist read and interpreted texts. Without the initial obstacle of finding the manuscript reading room closed, it might have taken me longer to discover this amazing treasure.

HAB: How have you found the library during the pandemic?

Tomás: Apart from going to the reading room and ordering books, I don’t have much idea of what’s going on at the library itself. We still can’t browse the reference library, so I usually just order books online from my office and drop by the counter in the Zeughaus every couple of days to pick them up.

HAB: What kind of contact do you have with the other fellows and the library staff?

Tomás: For me this has probably been one of the saddest aspects of ‘Wolfenbüttel during Covid’. I had heard wonderful stories about the collegial culture at the HAB, how the scholars and staff would regularly have coffee together and hold discussions. Currently, there’s of course almost none of that going on. I have very much enjoyed the virtual events and colloquia that the library has offered, but it’s hard to get to know people properly in that kind of setting. I’ve become friends with a couple of other researchers (who are also here for longer stays) and we sometimes meet for a coffee outdoors. In April a researcher couple moved in next door with their two-year-old daughter. That was a stroke of luck for us, above all because our son now has someone of his age to play with! Most of my contact with the staff is by e-mail. I’ve also had some very friendly conversations, but the current atmosphere is rather isolating – it’s almost impossible to start a conversation with anyone (which is a challenge in a foreign culture and a foreign language at the best of times), since everyone’s trying to keep their contact with other people to a minimum.

HAB: What’s a typical day like for you and your family here in Wolfenbüttel during Covid?

Tomás: Most days aren’t very exciting. I get up before my wife and my son and leave the flat at around 7.30 am. I go to my office in the Anna-Vorwerk-Haus to work. Sometimes I spend all the opening hours (10 am to 4 pm) in the Zeughaus reading room; on other days I stay in my office until 5 pm and then go home for dinner. Roughly two evenings a week – at least during the American semester, when there are a lot of virtual events going on at my home university – I have evening Zoom meetings, so then I stay in the office until late in the evening. My wife Eleanor is a stay-at-home mom (which during Covid you can take pretty much literally) and spends the day at home reading and playing with our son Marvin (who’s two) and experimenting with German recipes and German kitchen equipment. But the two of them do take one or two long walks everyday if the weather is OK, and they sometimes drop by my office to say hello. We spend most evenings and weekends together.

HAB: Is there anything special that characterises your stay here?

Tomás: What immediately springs to mind is how aware my son is of masks. Marvin’s vocabulary has made a real leap since we arrived, so it’s not surprising that ‘mask’ is one of his words, but it’s revealing that he regards masks as an important part of leaving the flat. Whenever we’re getting ready to go out, he calls out, ‘Shoes! Mask! Keys!’ He has also taken to pointing it out to us when we go past someone who isn’t wearing a mask, which can sometimes be a bit embarrassing! I don’t think it would be like that in the US, or at least not in the same way. Since we have our own house there and go everywhere by car, putting on a mask wouldn’t be part of the routine of going out somewhere unless we were going to a grocery store, say. Going for a walk where we live in the US wouldn’t normally require a mask. So, in the US, Marvin’s understanding of masks wouldn’t be so much ‘what we wear when we leave the house’ but instead ‘what we wear when we go into certain buildings’. I suspect that it may have an impact on how he perceives the relationship between the outside world and his home. That doesn’t necessarily have anything to do with the HAB but is just a snapshot of an American family that has been transplanted to a small German town during Covid.

Tomás Valle studies Lutheran intellectual culture around 1600 with a special focus on the network of professors who worked at the universities of Helmstedt and Rostock. His work in Wolfenbüttel is funded by the Fulbright Foundation. Click here to read our HABlog on the restoration of Johannes Caselius’s manuscripts.

We would like to say a big thank you to Tomás and his family for sharing their experiences at the HAB with us.

The interview was conducted by